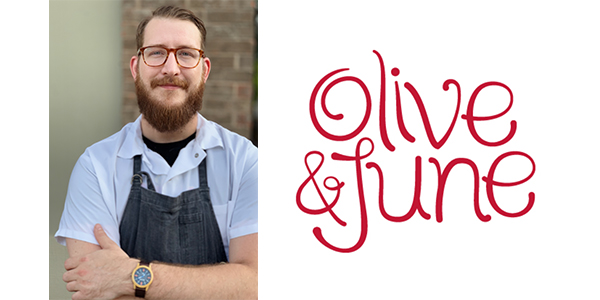 A five-course dinner with wine pairings
in Olive & June’s private room for up to 10 people.

This sample menu will give you an idea
of the possibilities available for each course; actual courses and ingredients will vary
according to seasonality and availability.

Zagat named parkside’s Aaron Anselmi one of the secret weapons behind the top restaurants in Austin — and for a decidedly good reason. Chef Anselmi has spent his entire career learning and perfecting his skills in the kitchen.
A native Austinite, Anselmi grew up heavily influenced by his late mother’s Southern cooking,
realizing at an early age that food has the ability to bring people together.

At 14, he landed his first job washing dishes at Ferrari’s, a mom and pop spot in Taylor.
It didn’t take long for Anselmi to move up to line cook, where he began practicing his craft.
He attended Le Cordon Bleu College of Culinary Arts in Austin
while working as a sous chef at Three Legged Willie’s, learning how to run a kitchen and manage a team.
After leaving culinary school, Anselmi got a job as a cook at parkside — Austin’s first gastropub and the brainchild of celebrated chef Shawn Cirkiel — where he immersed himself in the kitchen, including the 15-hour days during SXSW.

Chef Anselmi’s dedication and passion put him on the path to success,
and he was promoted through the ranks of banquet chef, sous chef, and co-chef de cuisine.
He learned about farm-to-table dining before it became the norm in Austin.
He also staged at two Michelin star rated restaurants in San Francisco—Statebird Provisions and Sons & Daughters.

Chef Anselmi has just been tapped as the executive chef of Italian neighborhood eatery Olive and June,
where he oversees the kitchen staff and all aspects of the menu, from purchasing products
to experimenting with the nuanced flavors of simple ingredients. Always happiest around food,
Anselmi strives to impart that same feeling to his guests.

Olive & June opened in 2012, and is named after the grandmothers of chef Shawn Cirkiel and his wife.
Olive & June raised the bar for Italian cuisine in Austin with an emphasis on handmade pasta made in house, daily.
The three-story building is enveloped by a 200-year-old oak tree with four different dining areas inside and out.

Olive & June also has the largest and most diverse selection of Italian wine, Amari, and Grappa in Austin.
As part of the Parkside Projects company, Olive & June is well known for its formal yet friendly service.
Guests can look forward to new and exciting ways our chefs are celebrating the cuisine and culture of Southern Italy with their friends, family and loved ones.